Onward toward the Yukon!

Saturday
Our gas tank filler is acting up and when Dean thinks he has it as full as possible, it’s not.  In Dawson Creek, it didn’t get full again, so we had to stop in the middle of nowhere and pay $6.11 a gallon - got just enough to get us to Fort Nelson where it was ‘only’ $5.51 and this time we really must have filled the tank because it was $185.00!
Stayed overnight Saturday in a nice rest area with running water (therefore flush toilets!)  When we stopped we were the only ones there, but by the time we went to bed, there were cars on either side of us and several other RV’s.  The truck that was idling, in spite of the ‘no idling’ signs, left, thank goodness!
Sunday
This was the most scenic part of the trip, all in all.  So far.  Lots of vistas of the Northern Rockies and many rivers.
Our plans to camp at and use Laird Hot Springs were thwarted when Janet spoke to a woman at the visitor center in Fort Nelson.  She was covered in mosquito bites from using the pool there.  And she had used 100% Deet, too.  I’ve gotten a few bites, but nothing bothersome.
Plan B was to go to an RV park at Muncho Lake.  When we all met up there, we decided  against it because it was $50 a night!!  None of us wanted a shower THAT badly!  The Schaffers, however, needed to access WiFi and there was no where else to do that, so they ended up staying there while The C’s and Dean and I opted for staying ata wildlife viewing area (where all we saw were 3 caribou) next to the lake.  It was a pleasant evening, no mosquitoes, and 3 of us even played a few games of Rumicube!  Since it was still so light out, it was after 10 when we turned in.  Went to sleep pretty quickly.  When I woke up a couple of times during the night, it was dusk-ish, so never did get dark. 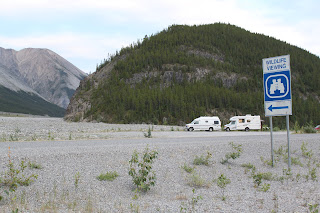 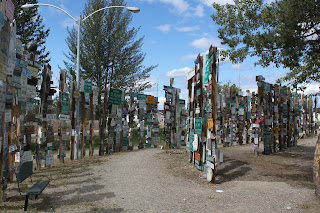 Today - Monday, I think - we went to Watson Lake and stopped at the Visitor Center (of course...) where the famous sign post forest is located.  It's got to be the very best!  The people were incredibly friendly and helpful. 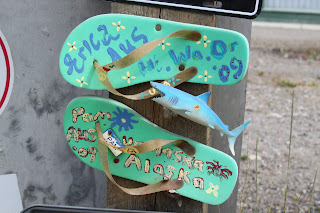 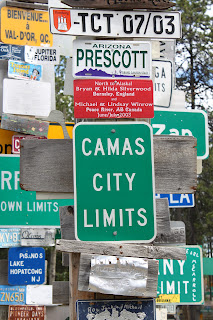 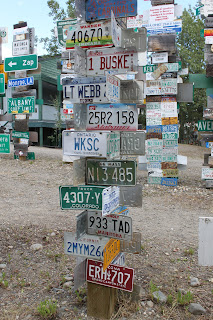 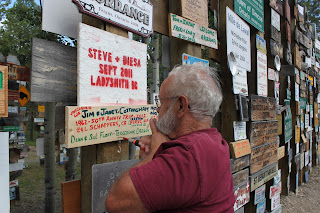 Janet bought a board and we put our names on it to add to the 'forest'. 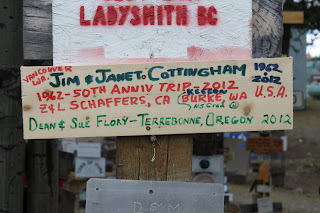 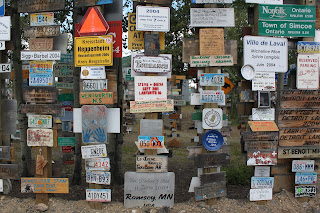 This evening, we are camped in an RV park that is nothing like the advertisement, but we decided to stay anyway.  There IS internet, after all, so I can get caught up!!!  It's the little things, right?  The showers are not working, so they let us into one of the 'motel' rooms to use the shower.  Interesting!  There IS electricity, so we can at least charge up our devices.  No water at the sites, a possibility of a dump, the laundry?  I think I'll wait!  And the noise?  We're in the middle of the Yukon, so the power comes from a generator - noisy!  There is a chopper that has been evidently ferrying workers to somewhere and planes take off and land occasionally from somewhere nearby.  When we arrived, there was a large group of bikers - the motor type and with sag wagon, no less - that were intending on staying.  When they learned that the showers were inconvenient, they decided to mosey on.  Several large motorhomes came in after us, however, and stayed.  Go figure!
Posted by High Desert Living at 11:14 PM

I told Jimbo to text you and tell you to go to the Signpost Forest, but I see you guys were all over it. I'd love to see that. VERY cool. And you are there now!

Brings back memories when we went in 1996. Stayed at lots of campgrounds not up to the advertisements. Love reading about it.