It was a cold and foggy morning - 8 AM - when we left Gold Beach for our Mailboat trip up the Rogue River. Here, we just left the dock and are headed towards the ocean - before turning up the river. You can tell that people are bundled up pretty well - our "driver", Jon, even handed out wool blankets. 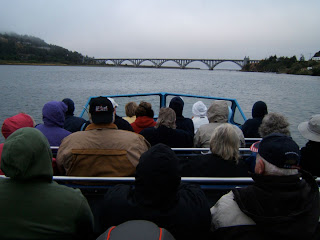 When we broke out of the fog, it warmed up quite a bit. Here are some live oak (as opposed to "dead" oak?) trees on the hillside 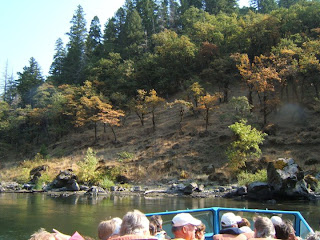 We were able to see a lot of wildlife - harbor seals, bald eagles, osprey, even "Rogue River moose" (cows...) Here is a blue heron that posed for us. 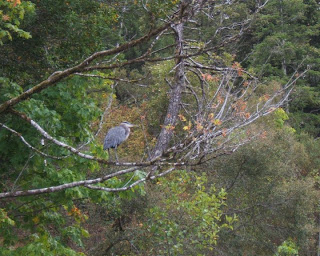 We were able to see a little white water. Jon did several rapids more than once to get us good and wet. We sat at the very back of the boat - in my opinion, the best place. We were able to talk to Jon and get more tidbits of information and the seats are slightly elevated, so the view was pretty good. But the BEST part was that we could stand up for the white water, which made it even more fun. I didn't want to get my camera wet, so this is the only photo I took - not very big rapids, but it was fun. 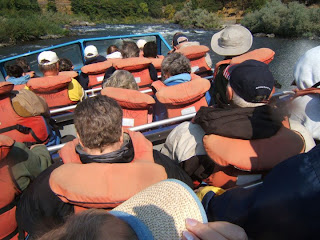 We stopped for lunch at the little town of Agness. The Rogue sometimes "overflows" it's banks during spring runoff - actually, it ALWAYS does. But back in 1964, there was a warm spell during December which wreaked havoc on the area. A new bridge had just been built over the Illinois River where it flows into the Rogue - it was washed out. There was a suspension bridge to the town of Agness - it washed out - which means you now have to go upriver about 4 miles, then cross ANOTHER new bridge and down a narrow windy road to the town, because "they" decided to not build another bridge. And this wasn't even a "bridge to nowhere"........... The high water marks for various years are indicated on signs on the trees visible as you walk up the path to the Singing Springs Resort which is nestled in the trees in the photo below. The high water mark for 1964 is on top of the roof of the cafe - at the bottom of the arrow. Now, that's some high water! 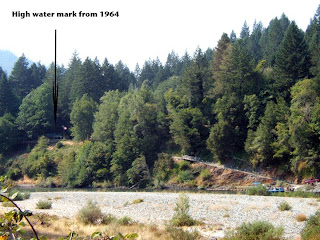 This is Jim and Janet and our driver/guide, Jon. 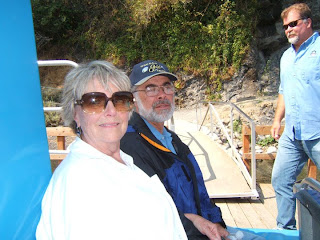 Jon pointed out many things on the trip, but of particular interest was this section of the river which had a natural "sluice box" in the rocks. Evidently, miners in the early days got quite a bit of gold from the cracks between the rocks. I was on the wrong side of the boat to get a good picture, but hope you can get the idea in the photo below. 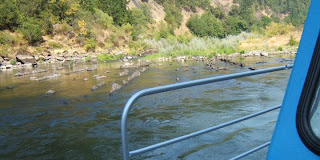 On the way back down the river, we finally got to see the otters playing in the sand on the river back. When we pulled over, they scampered to the left and disappeared under some rocks, but I got a couple decent photos - even one in mid-jump! 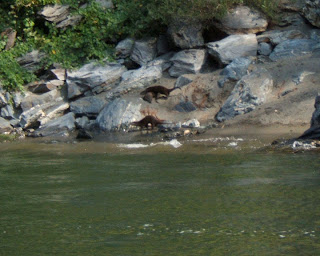 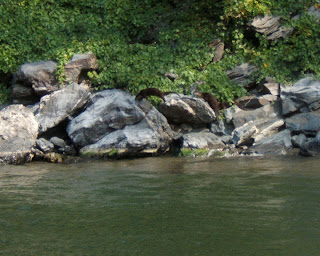 We enjoyed the trip, but it made Janet and I wanting a real whitewater rafting trip. Maybe next year....... From Gold Beach, we went up the coast to Bandon and stayed in a campground with hookups for a night to charge the batteries and take care of all those trailer things (dump and fill) From there, it was over to Roseburg and I5 and the previous post.
The next post will be from the Chetco River out of Brookings.
Posted by High Desert Living at 12:51 PM

Followed you back from over in Lori's comments. Glad you enjoyed the interview. This looks like a grand little adventure you had here. I looked at Oregon before settling on the Appalachian mountains.

Just wanted to stop by, check out your blog and say hi!