At 6:30 one morning, after eating our usual yummy breakfast, (the best peanut butter I have ever had..) 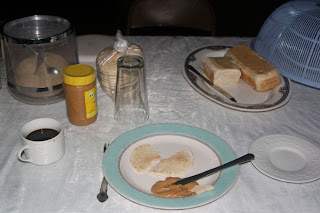 Mark picked us up, then at least a dozen people piled in the back of his truck and we set off for Hinche. The group of people were going to town to register to vote in the coming election! Town was busy, as it always was, though even busier on market days. They may be working on this street, but I'm not sure. It didn't seem to change. 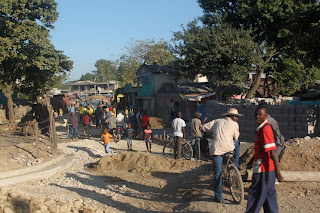 One has to be quite assertive to maneuver on the streets. Lots of horn honking, but people are amazingly nice - they just move out of the way or wait. I never once saw "road rage" and in our society, it would have been all over!! 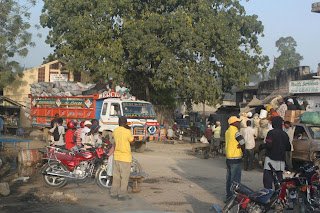 The white building in the background is the funeral home - there is a hearse parked behind the fence/gate. I would say that 90% of the clothing is used and from the US - I doubt that this guy is a Sixers fan........ He was helping to unload a large truck into the smaller wagons. 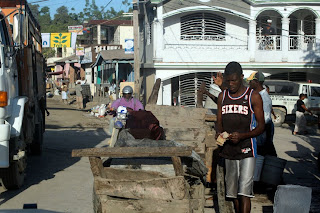 Next, we went out to one of Mark's MPP projects at Colladere. By the way, in Haitian it is:
“Mouvman Peyizan Papay,” or “Farmer’s Movement of Papaye.” There was a link in the previous post which explains the history of MPP.
Shown in the photo below, much of their vegetable crops are grown in tires, which offer several solutions to problems. It is easier to work with and amend the soil, it gets the crops off the ground so they are not eaten by marauding goats, chickens, or other animals, and it provides a good use for them rather than tossing them! Also, it is much easier to work at that height! In the back at the left is Amaranth, the leaves of which are used like spinach. 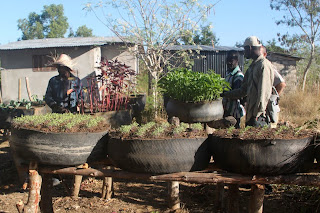 These are Moringa trees which have small, but extremely nutritious leaves. The trees grow very fast, have an edible pod, and the roots can also be eaten, somewhat like horseradish. Unfortunately, they are a tropical species, so I can't grow them here in Central Oregon. 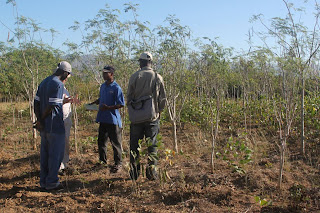 Shown in the photos below is how they prepare the tires for use as containers. It is important to turn them inside out. Small sticks are woven across the bottom, then sand, then their planting soil mixture. They utilize a lot of manure for fertilizer, also. Chicken, goat, bat guano, etc. 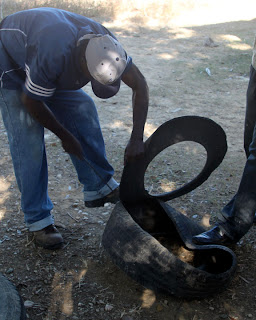 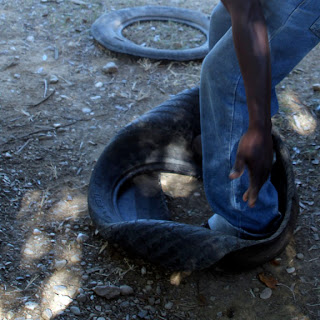 This is how they process the sugar cane. Sometimes, cows or oxen are used to turn the press, but usually, it is people powered. The stalks are shoved into the press and the juices extracted, then placed into a very large "pot", of sorts, which is cooked down. The wood fired stove is visible in the background on the left. While they make molasses, rum is also being made for export. In fact, one of the world's most famous, Rhum Barbancourt, comes from Haiti. They were selling it at the duty free store at the airport - $57 American - too rich for my blood! I think the box contained 2 or 3 bottles, but I still passed. 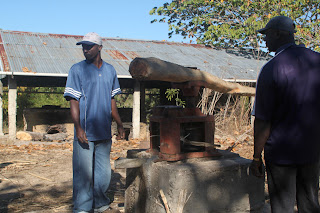 From Colladere, we drove to Twa Woch, another village in the hills. Susan had been there on her first trip in June. At that time, this was their school. Keep in mind that tuition is required to attend school - it can range from $50 a year to hundreds. I would guess that this school is in the $50 range. 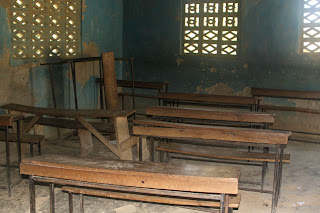 We met with members of the community to discuss their water problem. They have 2 taps - 1 is dry and the other is "heavy" - their description. One of the current goals is to get good water for them again. 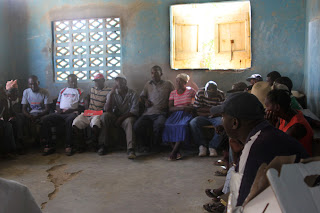 While Susan was there before, she asked what the kids would like and they said something to do outside of school - something to play with. She brought a large box of things - games, projects, various toys. But the most popular, probably, were the soccer balls - 1 for the boys and 1 for the girls. 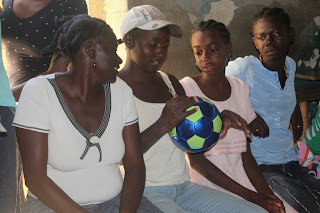 I took lots of photos there, but thought this family was pretty cute. I got lots of smiles out of these kids. 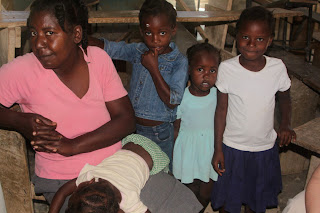 This guy, however, wasn't so sure about me.......... But I love the photo. We really didn't have a chance to interact with the people as we had things to accomplish and an interpreter who, shall we say, embellished or misunderstood much of the discussion....... 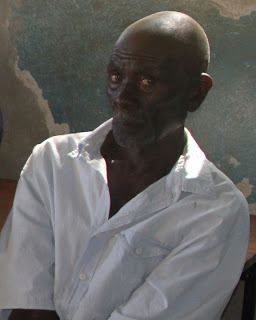 This is where I will leave off for today. I'm still working on the photos.
More later!!
Posted by High Desert Living at 4:23 PM

This is INCREDIBLE! So beautiful! The work you're doing touches me on such a deep level!
Utterly inspiring!!